Karnataka houses a number of wildlife sanctuaries that give shelter to various species of flora and fauna. Besides being a safe abode for different wild animals, these sanctuaries have become one of the major tourist attractions of the state. Several tourists from far and wide visit these sanctuaries each year to enjoy the tranquillity of these places.

Here are some of the popular wildlife sanctuaries of Karnataka

Spread over an area of 539.58 sq km, the Biligiriranga Swam Temple Wildlife Sanctuary or the BRT Wildlife Sanctuary is situated in the Chamarajanagar district in Karnataka. Acacia sps, Angogeissus, Kydia calycina, Lillium, Dalbergia lattifolia, Michelia champaca, Grewia tilaefolia, Emblica Acacia, Zizyphus, Pterocarpus marsupium and Syzygium cumini are some of the plants that are commonly seen here. Animal lovers shall be delighted to see various species of mammals including tigers, leopards, deer, elephants, sloth bear and sambar. The place is also perfect for those who enjoy bird watching. In December 2010 the place was declared a Tiger Reserve.

Situated in the Somawarpet taluk of Kodagu district, the Pushpagiri Wildlife Sanctuary borders the Bisle Reserve forest on the north and the Kukke Subramanya forests on the west. It is home for several wild animals and some of the endangered species of birds. Brown palm civet, Indian hare, Travancore flying, Indian giant squirrel, giant flying squirrel, Asian elephant, wild pig, mouse deer and gaur are a common sight here. Trekking past the sanctuary you shall also be able to see several species of plants.

This is another popular wildlife sanctuary of Karnataka. It is situated in the Kodagu district which is around 200 km from Bangalore. Spread across an area of 181.80 sq kilometres, the Brahmagiri Wildlife Sanctuary is home for various species of animals including tiger, leopord, jungle cat, lion tailed macaque, bonnet macaque, wild dog, wild pig, nilgiri langur, nilgiri marten, malabar, elephant, sloth bear, barking deer, mouse deer, brown mongoose, giant flying squirrel, porcupine and civets. Pythons and cobras are also a found here. Black bulbul, emerald dove and Malabar trogon are among some of the birds that are seen flying in this wild life sanctuary.

Walking past its evergreen forests here you shall be able to see several bamboo trees and various species of plants.

The Cauvery Wildlife Sanctuary, known for its dry deciduous forest, is spread across the districts of Mysore, Banglore and Mandya. It is spread accross 102.59 sq kilometres and gives shelter to several species of plants and animals. Mahseer fish is one of the main attractions of this sanctuary. Leopards, elephants, barking deer, spotted deer, chevrotain, four horned antelope, bonnet macaque, wild boar, langur and dhole are among some of the animals seen here. The grizzled giant squirrel which is on the verge of getting extinct is also found in this popular wildlife sanctuary. It is also home for around 300 species of colourful birds and several species of plants. 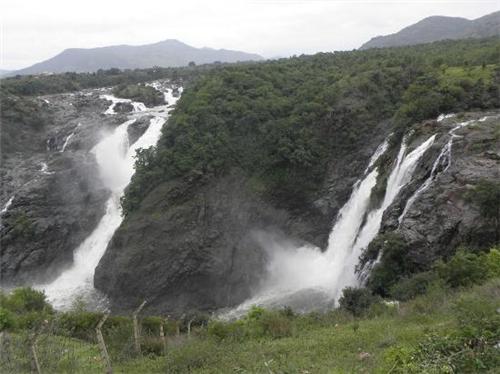 This is another wildlife sanctuary in the state of Karnataka that attracts a large number of tourists from around the world each year. It is famous for the twin falls of Barachukki and Gananachukki. It also houses the beautiful Mekedatu fall. Leopards, wild boars, jackals, monkeys and crocodiles are among some of the animals found here. It is also home for several species of colourful tweeting birds such as kingfishers, ibis and heron among others. Different species of flora fill the entire atmosphere with their magnetic aroma.

Karnataka encompasses a number of bird sanctuaries that are visited by bird lovers from across the globe each year. Several species of multi hued birds are found in these sanctuaries. Flora lovers also have a lot to explore here. Here are some of the popular bird sanctuaries in the state that attract tourists from different parts. 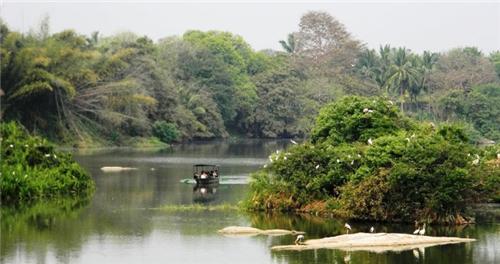 This is the largest bird sanctuary in Karnataka. Also referred to as Pakshi Kashi, this bird sanctuary is situated in Karnataka’s Mandya district which is about 16 km from Mysore. It is spread over an area of 0.67 square kilometer and houses several species of birds including the Ashian openbill stork, Indian shag, woolly necked stork, stork billed kingfisher, black headed Ibis, painted stork, herons, ducks river tern, streak throated swallows and oriental darter among others. Thousands of tourists visit this sanctuary each year. The best time to visit the place is from November to June. It is suggested not to plan your visit during the rainy season as many a times the place has experienced heavy floods around this time.

Located at a distance of around 10 km from the Shorapur taluk of the Yadgir district in Karnataka, the Bonal Bird Sanctuary is the second largest bird sanctuary in the state. It is home for more than 20 species of birds. White-necked stork, brahminy duck, purple heron, bar headed goose and ibis are a common sight here. Also known as the Bohnal Bird Sanctuary, it attracts several tourists from various parts of the country. Besides, beautiful chirping birds, you shall also be able to see a wide variety of plants that add to the beauty of the place. 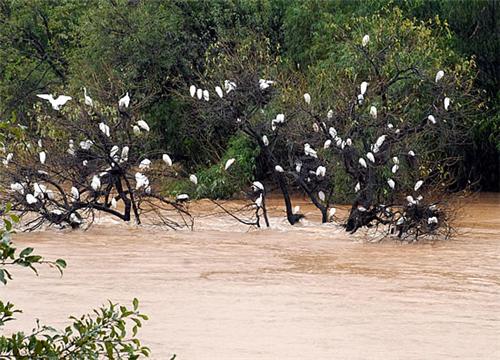 Mandagadde Bird Sanctuary is located in the Mandagadde village which is around 30 km from the Shimoga town. Spread over an area of 1.14 acres, this bird sanctuary is known for its scenic beauty. Surrounded by the serene Tunga river and thick green forest, it is one of the most popular bird sanctuaries located near Bangalore. It is just the right place for those who relish bird watching. More than 5,000 birds flock around this sanctuary between July and September which is said to be the best time to visit the place.

Located at a distance of around 43 kilometers from Hubli-Dharwad, this beautiful bird sanctuary is spread accross an area of 2.23 square kilometer. Black headed ibis, pied, Eurasian spoonbill, little cormorants, cattle erget and white throated kingfishers are among some of the birds that are seen here. A favourite weekend getaway for the people of Hubli-Dharwad, this place is also frequented by tourists from other parts of the country as well as outside. Besides various species of birds, you may even spot different aquatic creatures and numerous species of plants. It is best to plan your visit to this sanctuary between November and March.

Bankapur Peacock Sanctuary is spread accross an area of 139 acres on the remains of the Bankapura Fort. This is one of the two sanctuaries in India which is exclusively engaged in breeding peacocks, the national bird of the country. It is a safe abode for more than 1,000 peacocks and peahens. These beautiful birds are seen dancing and running around in this lush green sanctuary which known for its tranquil atmosphere.