Though there are several institutions and Yoga schools running almost all the big cities in Karnataka, Mysore, Bengaluru and Gokarna share the largest numbers of retreats. Mysore for its profound association with a specific Yogic practice is often regarded as the Ashtanga Yoga Capital of India. The state of Karnataka provides some of the most beautiful retreats in the country. Here goes a detailed list comprising of the best Yoga and Meditation Retreats in Karnataka.


The Art of Living, Udayapura

The Art of Living is one of the foremost institutions in India which has been working superbly towards letting the Yoga, Pranayama (a form of breathing practice) and meditation reach our daily life since the last 34 years. The institution is being run by one of the most popular spiritual Gurus of recent times, Sri Sri Ravi Shankar. The Art of Living is located at Udayapura, around 21 km away from the heart of Bengaluru. The institution has designed some Yoga programs in which they essentially focus on the total well-being of the body as well as nurturing the mind and spirit.

The Pranayama and the meditation programs aim at uniting the mind, body and breath. The most significant part of the Yoga, Panayama and Meditation programmes at the Art of Living is the Sudarshan Kriya. Sudarshan Kriya is the rhythmic breathing technique which helps integrating our natural rhythms of breath and then simply harmonizes the body, mind and emotions. The Art of Living offers two-tire Yoga and Meditation learning programs. Yoga Level 1 is a ten-hour program for the learning the basics of the Patanjali Yoga and Yoga Level 2 is a more advance and intense program for which completing the Level 1 is pre-requisite. 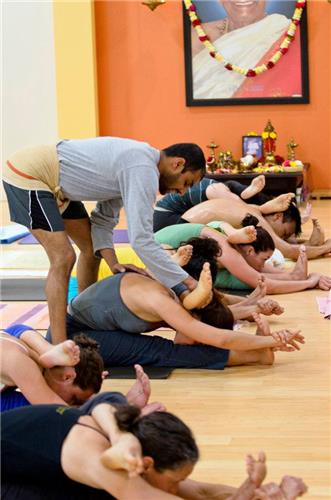 To take up a Yoga and Meditation retreat course, one has to fill an online application which is to be submitted 2-3 months prior to the commencement of the course. Each course takes around a month to complete. The institution does not provide any food and accommodation service. 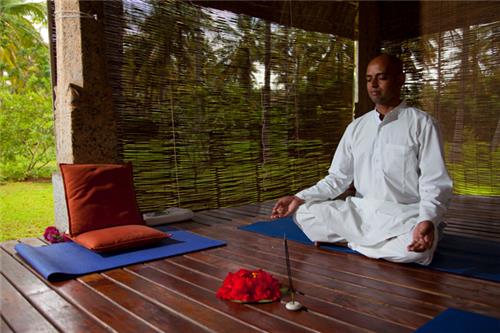 Shreyas Yoga Retreat is a luxury retreat centre expanding over 25 acres of greenery at Bengaluru (Bangalore). A secluded place with a quaint atmosphere of garden, rural-styled huts and all the necessary facilities available, Shreyas offers a complete tranquility to rejuvenate your mind, body and soul. A maximum of 20 guests are allowed at a time at the Shreyas.

The Retreat serves the authentic Hatha and Ashtanga Yoga, Pranayama and Meditation programs in a modern spa like ambience to unshackle the negativities dwell inside us. The retreat uses authentic organic products and no non-vegetaran products and smoking/alcohol is allowed inside the centre. Shreyas Yoga Retreat is a member of the Relais & Chateaux group of Hotels and Resorts. The retreat provides complete food and accommodation service to the guests. It is one of the most popular Yoga and Meditation retreats in Karnataka. 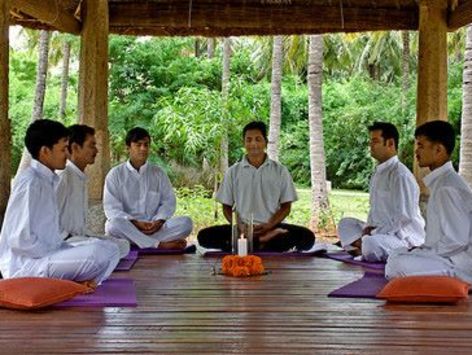 The Yoga Wellness Centre, another well-known Yoga and meditation retreat in Karnataka practices the authentic Satyananda Yoga Tradition which is also known as the Bihar School of Yoga Tradition. This specific Yoga tradition is modern Yoga system which was established by Swami Satyananda Saraswati.

This form is a modified and holistic system of the Kama Yoga, Bhakti Yoga, Hatha Yoga, Kriya Yoga, Jnana Yoga and Raja Yoga of the ancient Patanjali Yoga Tradition. The Yoga Wellness Centre was established by two brothers Raj and Chandra Kamal in 2012; both are the trained students of world’s first ever Yoga University, The Yoga Bharti.

The Wellness Centre has redesigned the Yoga classes for both young and old based on their mental and physical conditions and requirements. Every Saturday an Evening Meditation gatherings, retreat, Yoga Trip and workshops take place at the centre. The centre has become a popular Yoga and Meditation retreat hub within a very short span of time since its inception.

The two words, ‘India’ and ‘Dea’ which means ‘light’ in Sanskrit were incorporated intone and thus the word ‘Indea’ came. The IndeaYoga is a yogic practice method designed and developed by Yogacharya Bharatha Shetty at the Ananda Yoga India, Mysore. They offer a custom made Yoga programs based on three principlas of Abhyasa (practice), Arogya (health recovery) and Ananda (bliss). The programs differ on the basis of age groups and the health conditions of the students and visitors. Ananda Yoga Indea strictly practices the Mysore style Yoga and meditation method. 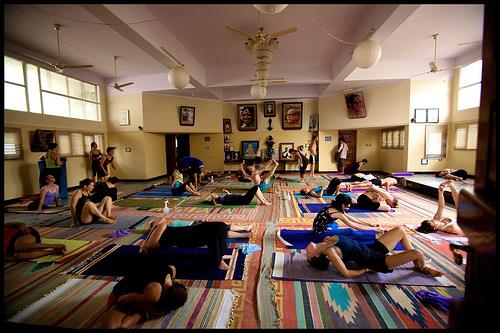 Practicing Yoga and meditation heals the inner unrest and unites the mind, body and soul; but practicing them right bears the actual fruit. If not done carefully and without proper guidance, Yoga and meditation would be clearly futile. The Ashtanga Yoga Mysore offers special training courses at a perfect Yogic atmosphere and under the most vigilant eyes of some of the renowned Yoga Gurus and practitioners.

The teachers (Gurus) let the learners go through some assiduous training periods designed according to their mental and physical circumstances. A standard 200 hours of Yoga and Meditation training program take place here at the Ashtanga Yoga Mysore. The learners come to know about the Yogic traditions of India as well as the process to reclaim and to sustain the inner peace and physical strength through several workshops and speeches. 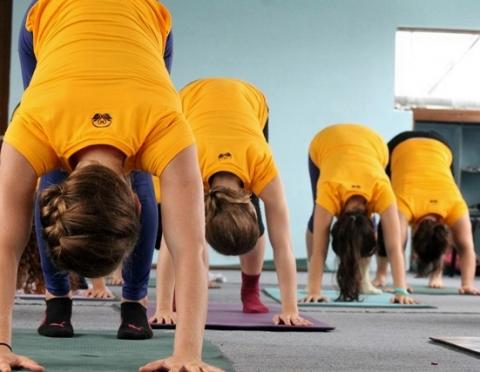 Samyak Yoga Ashram is a beautiful place which treats you with the yogic indulgence. The Ashrama offers a 200-hour Yoga and Meditation training program where they teach the basics to advance practical aspects of both Ashtanga Vinyasa Flow Yoga and Hatha Yoga Flow. This intense program of Yoga and Meditation would strengthen your body and mind and would also rejuvenate the soul. 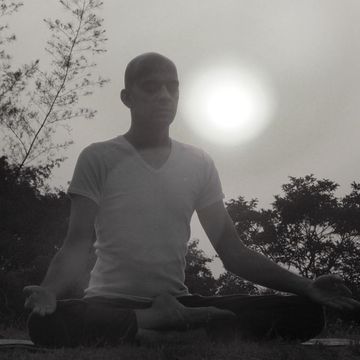 Samyama Academy of Yoga is a delightful retreat located at Bengaluru offering the authentic practice sessions of Yoga and Meditation. They strictly follow these two words Abhyasa (Practice) and Sadhana (Perseverance) in their practical discourses during the programs.

The academy teaches how to control the inner-self, to build self-alliance and to connect the mind with the body and soul to bring about a celestial and holistic experience throughout the passionate yogic sessions. The Dhyana or the meditation sessions cleanse the inner soul and restore peace of mind. 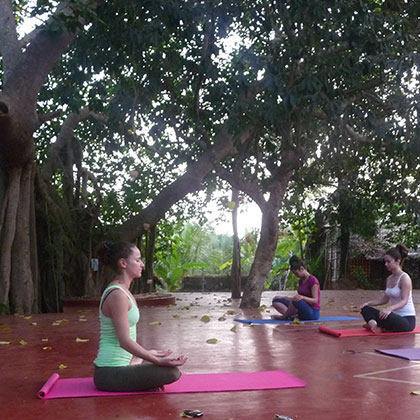 Like Mysore, the beautiful beachside city of Gokarna is also a hot-spot as Yoga retreats. Famous for its outstanding mythological value, this ‘Brahmin Town’ in the West Karnataka has several places where Yoga and Meditation courses take place at a regular basis.

Established and maintained by the Yoga Guru Oliver Miguel, Namaste Yoga Farm is a well-known holiday resort which is mostly popular as a Yoga and Meditation retreat. On their own words, it is not just a hotel, but a way of life! This beautiful resort lies at a picturesque environment entering where you would instantly forget about your busy and chaos urban life and start indulging yourself with an abundance of serenity.

Namaste offers several Yoga and meditation programs from a seven day to a month long session. These sessions take you to some authentic and unforgettable journeys towards the Yogic spirituality. The Namaste Yoga Farm also provides Reiki healing, art and chess classes, Beach Ball and Body Board and overnight River Kayaking tours to make your staying more enjoyable and eventful. 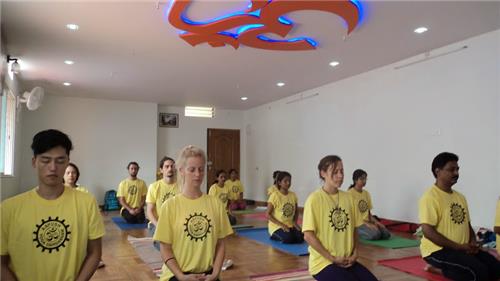 Ayush Yogadarshanam Spiritual Pvt. Ltd at Mysore is a Government of India registered and undertaken institution working for humanity and for promoting the ancient Indian Yogic practices. They aim at enhancing the human lifespan by uniting the mind, body and spirit through severe Yoga practices. The Yogadarshanam also offers seven types of pure meditation processes based on the learner’s physical and mental stability and requirements.

Ayush Yogadarshanam runs by a young Yoga Guru and a successful disciple of world famous Yoga legend Shri B. N. S. Iyengar, Shri Santosh Kumar. The other Yoga teachers of this institution were trained under some most significant Yoga Gurus like Sri Sri Ravi Shankar, Swamy Ramdev, B. N. S. Iyenger, Swamy Shivananda and many more.